The Shattered Mirror just broke into a million pieces

Criticism is piling up of the Public Policy Forum’s controversial new report, The Shattered Mirror. The first round was of the knee jerk variety, which is what the daily press specializes in. A second round of analysis is now under way by academics, who are by nature more contemplative and less reactive. I was a bit hard on the report, which was authored by former Globe and Mail editor Edward Greenspon, in an entry posted earlier this week on my old blog, Greatly Exaggerated, calling it “more like a funhouse mirror.” My 2014 book Greatly Exaggerated: The Myth of the Death of Newspapers produced reams of data to show that newspapers in Canada and the U.S. were still making healthy profit margins. (They still are.) The Shattered Mirror nonetheless goes to great lengths to perpetuate the myth that newspapers are “bleeding red ink.” (As do others.)

My new book, The News We Deserve: The Transformation of Canada’s Media Landscape, to which this blog is dedicated, looks at exactly what has brought our news media to near banana republic status. I mainly blame our absurdly high levels of media ownership concentration, which the federal Competition Bureau has failed to halt or even challenge, and majority ownership of ’s largest newspaper company by hedge funds in contravention of our foreign ownership limits, which the erstwhile Harper government chose not to enforce. The Greenspon report dismisses concentration as a problem, fails to even mention foreign ownership, and gives the Competition Bureau a pass.


Now Carleton University media economist Dwayne Winseck has weighed in with a scathing but lengthy analysis on his blog Mediamorphis, calling the report “badly flawed” because it “cherry-picks evidence and gooses the numbers” to make its case. This, of course, is what think tanks like the Fraser Institute do – start with predetermined policy conclusions and muster enough evidence to support them while ignoring evidence that doesn’t. Chief among The Shattered Mirror’s crimes, according to Winseck, is exaggerating the online bogeyman.

There is . . . an acute sense of threat inflation that hangs about it. The extent to which Google, Facebook, Silicon Valley and “the Internet” are made the villains of the piece is both symptomatic of how the report tries to harness such threats to preordained policy ends and a framing that undermines the report’s credibility.

Not only does The Shattered Mirror dodge the issue of media ownership concentration, notes Winseck, it also overlooks the impact of the 2008-09 financial crisis, which brought a sharp drop in advertising from which our news media have yet to recover “and likely won’t.” Besides, he adds, “advertising is no longer the centre of the media economy, and [is] receding ever further from that role by the day, so hinging a policy rescue on recovering so-called lost advertising is out of step with reality and likely to fail.”


As the bottom on advertising revenue falls out that source of subsidy will have to be replaced by another if we really are concerned about getting the news we deserve – trying to wrestle money out of Google and Facebook (the report’s central policy proposal) won’t cut it.

Winseck, who closely tracks media industries through his Canadian Media Concentration Research Project, is critical of the PPF report’s focus on the “fake news” fad and finds it generally alarmist. “The language about ‘vampire economics’ is overwrought,” writes Winseck. “Such things give a tinge of moral panic to the report, and taints the analysis and policy proposals.” Data presented in the report to paint old media as declining and even failing is highly misleading, according to Winseck. “Its fixation on advertising revenue, for instance, assumes that it has always been an integral part of the natural journalistic order of things. It has not.” A drop in conventional television revenues noted in the report is “misleading,” according to Winseck, in light of the lush profits being raked in by the broadcasting behemoths overall, such as Bell’s “eye-popping” 40 percent return on revenue.


is the biggest, vertically-integrated TV operator in by far, accounting for roughly 30% of all TV revenues and 28% of total revenue across the network media economy. Ignoring conditions at a company with this clout across the media economy is negligent, but also part of a tendency in this report to selectively invoke a small part of the picture to fill in a portrait of catastrophe of a larger kind. . . . The report is chock-a-block full of such examples, which lends to the impression that the report’s authors are goosing the numbers.

Likewise the report’s claims about collapsing newspaper circulation and journalism job losses. Its claim that between 12,000 and 14,000 journalism jobs have been lost since the 1990s relies on headlines and union data that “do a great job chronicling jobs lost but a poor one at keeping track of those gained.” Statistics data “depicts a wholly different picture,” showing that the number of full-time journalists in actually increased from 10,000 in 1987 to 11,631 in 2015. “Once again consistent with a pattern, the authors ignore this data completely.” My take on this is that there is no doubt mainstream media have suffered massive job losses due to cutbacks brought by plunging revenues, but digital media have proliferated, albeit with less well-paying and secure positions. And who knows how many of those new “journalists” actually pump out sponsored content a/k/a native advertising that is designed to look like news but is actually paid for by advertisers. 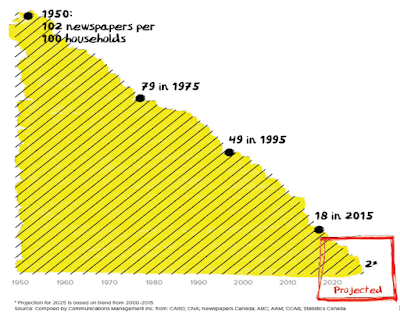 Circulation trends for daily newspapers, according to Winseck’s data going back to 1971, are similarly “not the catastrophe that The Shattered Mirror makes them out to be.” He has the same problem I have with the plummeting graph of newspaper sales per household (left), which the PPF report predicts will fall from 18 in 2015 to only two by 2025. “By this measure, the relentless decline and seemingly inevitable outcome look really, really bad – catastrophic even,” writes Winseck. But sales per household are increasingly less relevant as the number of households soars because people are increasingly choosing to live alone. Winseck performs an extensive analysis of historical newspaper circulation data to show that the Public Policy Forum has grossly exaggerated the decline of newspapers. The report, according to Winseck, “has selectively chosen a measure that paints the worst-case scenario.” This type of intellectual dishonesty might be common practice in the world of journalism from which Greenspon comes, but it won’t get past a scrupulous scholar like Winseck. My own research has found that newspapers have deliberately cut back on circulation in order to save on expenses because they actually lose money on every copy they sell.