What private equity firms do to newspaper chains like Torstar 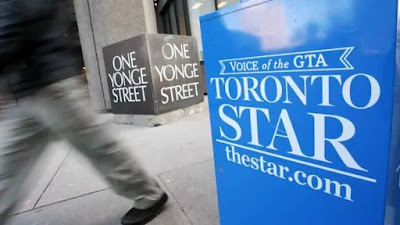 What must be the world’s worst-run newspaper company made its final, fatal blunder last week when the Torstar board of directors inexplicably agreed to sell it to a private equity firm for less than its cash in hand, much less its asset value. Torstar owns not only the country’s largest daily in the Toronto Star, a long-time liberal bastion, but several other Ontario dailies and the huge Metroland chain of community newspapers. The only possible reason I can imagine for the sell-off is that the Torstar board figured the current downturn in their business brought by the pandemic will somehow be permanent. Instead, like the rest of the economy, it is bound to bounce back after a quarter that will admittedly resemble a black hole on their account books.

The federal government has been pumping money into a wide range of businesses recently to keep them afloat during the crisis, not least the newspaper industry. Torstar recently reported that it expects to receive $18 million from the $76-billion Canada Emergency Wage Subsidy. Ottawa earlier allocated $50 million in 2018 and $595 million in 2019 to assist the withering newspaper business. It’s somehow never enough for News Media Canada, the industry association whose largest member is Postmedia Network, which is somehow 92-percent owned by U.S. hedge funds despite a supposed 25-percent limit on foreign ownership of our press.

Private equity firms love government handouts, which may be what got Torstar’s new owners interested. The newly-formed NordStar Capital promises to inject new life into the country’s second-largest newspaper chain. The important thing to remember about private equity firms, however, is to not believe a word they say and instead pay attention to what they do. They are the end stage of newspaper ownership, which began with family ownership in the 19th Century and moved to corporate ownership in the 20th Century once capitalists realized how profitable (and influential) they are. Now it’s vulture capitalists who are feasting on their still-profitable remains.

Postmedia promised in 2014 to preserve competition and even boost newsgathering when it bought Sun Media, then Canada’s second-largest chain. Soon after its takeover was inexplicably allowed by the federal competition Bureau, Postmedia merged the newsrooms of its duopoly dailies in Vancouver, Calgary, Edmonton, and Ottawa. So much for preserving competition. Then there was that naughty business in 2017 when Postmedia and Torstar traded 41 newspapers and immediately closed almost all of them, creating dozens of lucrative local monopolies for each other. Both swore up and down they had no idea that the other would do such a thing.

At least the Competition Bureau seems to have had its fill of Postmedia’s perfidy, raiding its offices and those of Torstar to find a paper trail which reportedly included agreements not to compete for years in the markets they vacated and even on which employees would be axed. The chains and their executives now face fines of $25 million and prison sentences of 14 years on possible criminal charges of conspiracy and monopoly. The whole thing has been mired in court ever since.

It was only one of a series of blunders in recent years by Torstar, which is quickly slipping under the waves as a result. It spent a reported $40 million in developing a tablet app that failed to attract subscribers and was finally ditched in 2017. Strike two. It then embarked on a national expansion by hiring 20 new staff for its Metro chain of free commuter tabloids. It rebranded the dailies StarMetro and boosted their bureaus in Vancouver, Edmonton, Calgary, and Halifax. The strategy lasted less than two years and was scrubbed last fall. Strike three.

Torstar’s profits fell to $29.2 million in 2019, down from $34.8 million the previous year in earnings before interest, taxes, depreciation and amortization (EBITDA). Its 2020 first quarter report curiously did not include the EBITDA metric, leaving me to calculate it at a shockingly low $2.7 million, down from $6.7 million in the same period a year earlier. Well, the first quarter is always the slowest. Except for hehe this year. Did the sudden sight of freefall panic John Honderich and other members of the families that control debt-free Torstar into selling their heritage? The price tag seems a bargain at $51 million. That’s less than the company’s last two years of earnings. It’s less than Torstar’s $69.5 million in cash. One wonders what the minority shareholders might have to say.

Even curiouser was a revelation by the Globe and Mail that NordStar was borrowing $50 million to finance the acquisition. Now it starts to make a bit more sense. The lender is hedge fund Canso Investments, which also financed Postmedia’s $315-million purchase of Sun Media and stands to inherit both chains if they go bust. At least it’s Canadian. Postmedia still makes north of $50 million in operating profit a year, however, so Canso could be waiting for a while. It made $54.6 million in its 2016-17 fiscal year, $65.4 million the following year, and $49.3 million in 2018-19, of which $28.5 million went to service its massive debt. It is also held mostly by its hedge fund owners, which bought it at deep discounts on the bond market when Canwest Global Communications was facing bankruptcy a decade ago.

This is how the hedge funds make their money, by skimming it off the top every month. As its revenues steadily decline, Postmedia has to cut costs – mostly by axing journalists – just to keep paying its loans. It did that well enough to make $26.8 million in the six months ended Feb. 29, which was actually up slightly from the same period a year earlier. That’s a 9.2 percent profit margin, yet they somehow have everyone bamboozled into thinking they are losing money and need to be bailed out. They will be getting a big surprise if a petition I helped author, which would limit bailout money to Canadian-owned firms, passes Parliament soon. I figure that would solve the problem of foreign ownership fast enough, as the bandits would likely beat a hasty retreat to the border.

The $50 million that NordStar is borrowing is supposed to go to finance some sort of digital makeover (remember, don’t listen to what they say) but it is curious that the amount is almost exactly the purchase price of Torstar. This is what the hedge fund New Media Investments did last year when it paid US$1.4 billion (C$1.9 billion) for Gannett, the largest U.S. newspaper chain. It borrowed the entire amount and more from another hedge fund at 11.5 percent interest. Now Gannett is laden with high-interest debt, just like Postmedia, and will continually have to cut costs as its revenues inevitably fall. If it goes under, the hedge funds will be first in line with their debt to take it over without some pesky legal obligations, such as leases, pensions, taxes, and union contracts, which bankruptcy allows them to escape. The Journal Register chain in the U.S. did this twice.

Hedge funds now own seven of the ten largest U.S. chains. “The large investment groups tend to employ a standard formula in managing their newspapers – aggressive cost cutting paired with revenue increases and financial restructuring, including bankruptcy,” noted Penelope Muse Abernathy of the University of North Carolina.  A 2018 takedown of the trend in the magazine American Prospect laid bare the “malign genius” of the private equity business model.

It allows the absentee owner to drive a paper into the ground, but extract exorbitant profits along the way from management fees, dividends, and tax breaks. By the time the paper is a hollow shell, the private equity company can exit and move on, having more than made back its investment.

The hedge funds even have their hooks into UK newspaper chains now. Johnston Press, one of the largest provincial chains, was taken over by its lenders in 2018 when it could no longer service its massive debt despite making a 20-percent profit margin. Newsquest, another provincial chain which is even more profitable, is owned by Gannett. The most brilliant tactic of all enabling this trend has been bamboozling people into believing that newspapers are instead losing money and deserve public handouts. Must be the influence.
Posted by Marc Edge at 1:23 AM